The University of Exeter has launched Eveoh’s MyTimetable to present personalised timetables to their 18,000 students and staff members. Exeter is one of the United Kingdom’s most popular and successful universities and combines world leading research with very high levels of student satisfaction. 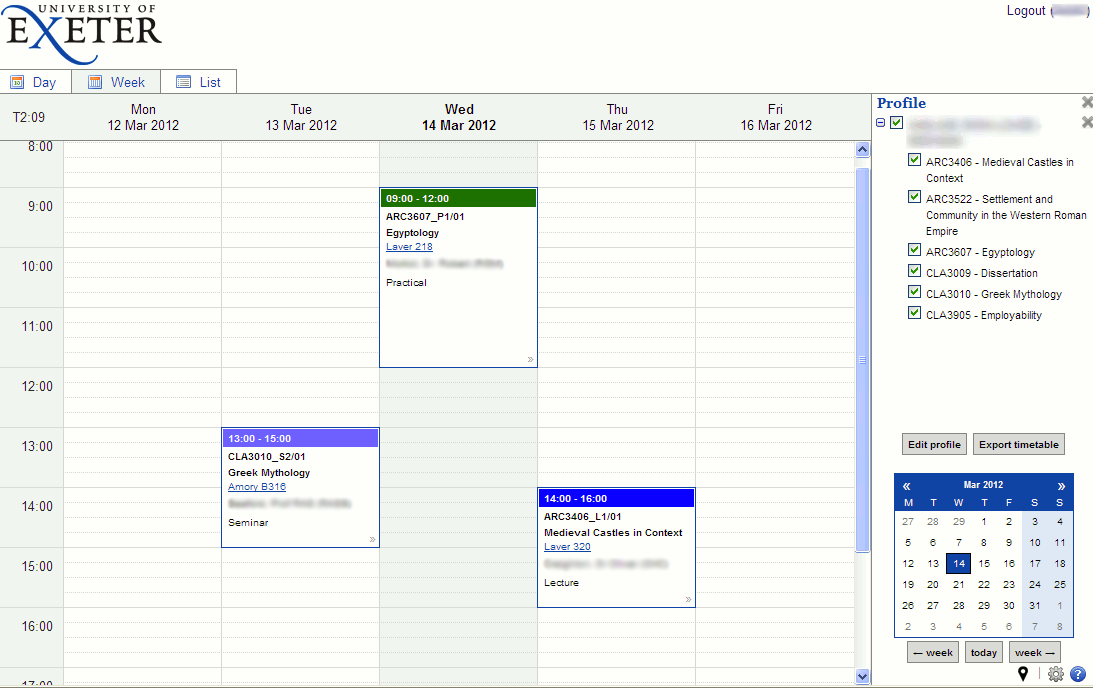 Last week the University of Exeter launched Eveoh’s MyTimetable to present personalised timetables to their 18,000 students and staff members. The launch, initially for the Exeter campuses with later rollout to Cornwall, is the result of a close collaboration between Eveoh’s development team and the Academic Systems and Timetabling teams at the University.

With MyTimetable the University aims to improve the timetable experience for its students and staff members. MyTimetable allows users not only to view their timetable in a modern and easy to use interface, but also lets users connect it to Microsoft Outlook and Google Calendar, or seamlessly synchronise it with a smartphone.

Ian Tilsed, Head of Academic Systems at the University of Exeter, is very happy with the results so far:

Launched only recently, the MyTimetable system has already attracted positive feedback from our students via email and Twitter. MyTimetable presents clean, and accessible, timetable views and its ability to feed to other calendars and mobile devices fits well with our mobile strategy going forward.

MyTimetable has been adjusted to the University’s corporate style and utilises the single sign-on environment to automatically present users with their personalised schedule. The University uses Scientia’s Syllabus Plus software for timetabling. MyTimetable connects directly to the Syllabus Plus Enterprise Reporting Database to retrieve timetables. To make sure students have an up to date view of their timetable, refreshing of the reporting database is optimised by Eveoh, reducing the refresh delay to just 2 hours. Also, the performance of the Reporting Database is improved in order to support a high number of concurrent users. Eveoh also worked closely with the teams at the University to support so called ‘Jointly Taught Activities’.

About University of Exeter

Exeter is a top UK university which combines world leading research with very high levels of student satisfaction. It is one of the UK’s most popular and successful universities with campuses in Exeter, Devon, and near Falmouth in Cornwall.

Exeter is ranked 10th out of more than 100 UK universities in the Times League Tables. It was the 2007/08 Times Higher Education University of the Year. Exeter is one of the top 200 universities in the world according to the Times Higher Education’s World University Rankings. The University scores highly for degree completion rates, and for students achieving good honours degrees (Firsts or 2:1s).

It is ranked sixth in the UK for student satisfaction in the latest National Student Survey amongst full service universities. Exeter has been shortlisted for the Sunday Times University of the Year Award more times than any other university and has won three Queen’s Anniversary Prizes for its research.

© Copyright - SEMESTRY 2021 All Rights Reserved.
We use cookies on our website to give you the most relevant experience by remembering your preferences and repeat visits. By clicking “Accept All”, you consent to the use of ALL the cookies. However, you may visit "Cookie Settings" to provide a controlled consent.
Cookie SettingsAccept All
Manage consent

This website uses cookies to improve your experience while you navigate through the website. Out of these, the cookies that are categorized as necessary are stored on your browser as they are essential for the working of basic functionalities of the website. We also use third-party cookies that help us analyze and understand how you use this website. These cookies will be stored in your browser only with your consent. You also have the option to opt-out of these cookies. But opting out of some of these cookies may affect your browsing experience.
Necessary Always Enabled
Necessary cookies are absolutely essential for the website to function properly. These cookies ensure basic functionalities and security features of the website, anonymously.
Functional
Functional cookies help to perform certain functionalities like sharing the content of the website on social media platforms, collect feedbacks, and other third-party features.
Performance
Performance cookies are used to understand and analyze the key performance indexes of the website which helps in delivering a better user experience for the visitors.
Analytics
Analytical cookies are used to understand how visitors interact with the website. These cookies help provide information on metrics the number of visitors, bounce rate, traffic source, etc.
Advertisement
Advertisement cookies are used to provide visitors with relevant ads and marketing campaigns. These cookies track visitors across websites and collect information to provide customized ads.
Others
Other uncategorized cookies are those that are being analyzed and have not been classified into a category as yet.
SAVE & ACCEPT